Hey readers! This #FeatureFriday we’re enjoying the end of the week by gearing up for the next one! Why you may ask? Amazon Prime Day. As the week draws to a close many avid online shoppers around the world, like ourselves, will be drafting up to-buy lists in anticipation for the offer-laden Prime day this 12th of July. Of note, Amazon’s stock has also been outperforming itself in recent months, but its success is not merely attributable to its online retail service, but to its sophisticated cloud computing platform. 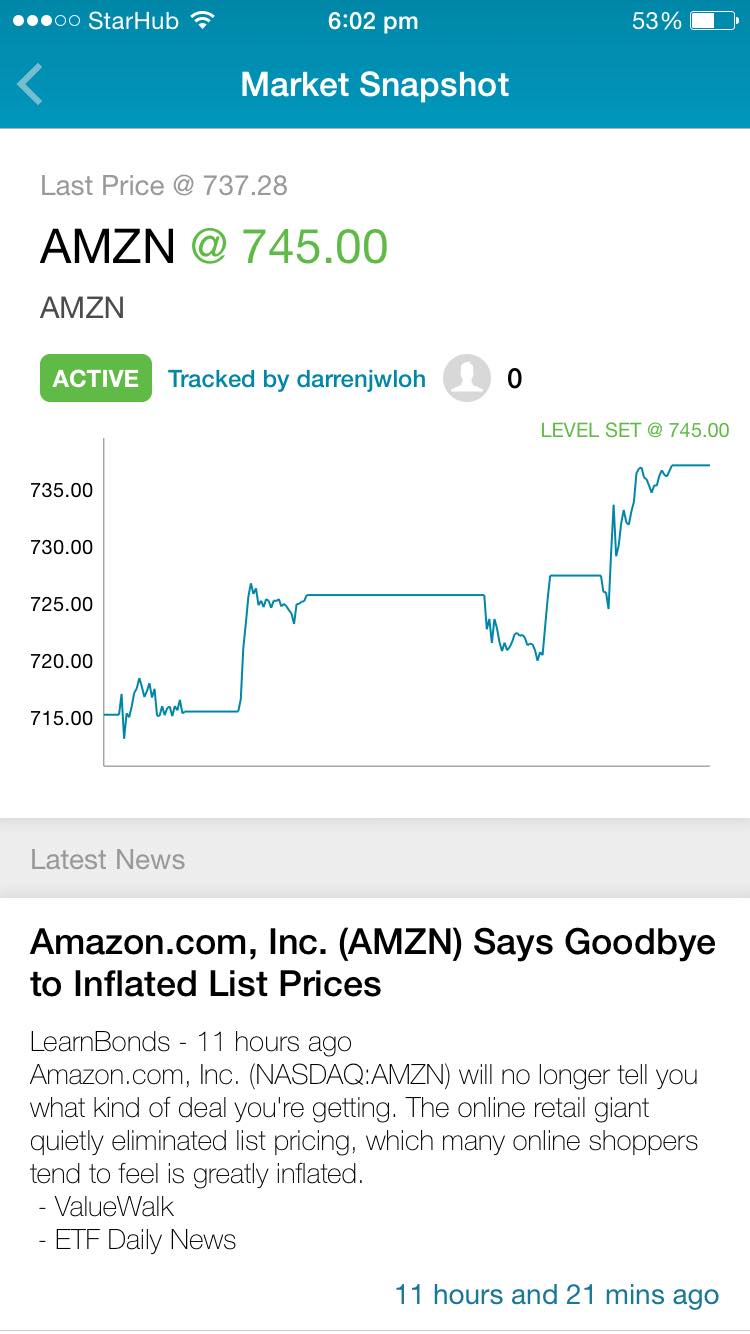 Amazon.com (AMZN) Stock Higher, No Brexit Impact So Far: (Released 06/07/2016) Amazon’s continued success this week might come as a surprise to those following recent #Brexit news. Curiously, this hasn’t been the case. The e-commerce giant said it has not seen a decline in sales at its British unit in the wake of the country’s decision to leave the European Union, Reuters reports. This optimism might be premature as Amazon’s executives are unsure of the long term changes the referendum might bring in the UK’s regulatory environment. Nonetheless, Amazon is planning to create 1000 additional jobs in the UK this year in addition to the 2,500 jobs it announced in January and will include its head office, research and development centers, customer service center, fulfillment centers, a fashion photography studio and Amazon Web Services.

Bull of the day : Amazon (AMZN) : (Released 06/07/2016)
Amazon’s online retail service is expected to bring in $134 billion in sales, representing 25.5% in annual growth. Furthermore, its EPS growth shows that more of its sales are in the green with a projected 330% profit acceleration. Amazon web services (AWS) has also gone a long way in helping Amazon reach profitability. Amazon continued to impress investors as the premier provider of cloud infrastructure services to enterprise customers. AWS generated revenues of $2.56 billion in Q1, growing at over 60% year over year in each of the last four quarters. AWS has its advantages over traditional retail businesses as it generates much higher return margins. This is despite the fact that Amazon has been consistently slashing prices to deal with growing competition, particularly from Microsoft and Google. This business is a major reason for the upward revision to analyst estimates since the company last reported earnings. The optimistic analyst outlook from Zacks project 20% sales growth in 2017, reaching over $160 billion for AWS.

Amazon Is Where Rivals Hope To Be : (Released: 06/07/2016)
The world is currently experiencing a global shift towards cloud computing infrastructure, with Apple pumping $12 billion dollars into its cloud this year and other large tech companies like Google and Microsoft are doing the same. Amazon however, is already far ahead of them with an incredibly rich and sophisticated cloud computing infrastructure that they sell as a service to other businesses. According to Dana Blankenhorn from SeekingAlpha: “ Device companies with their own clouds, like Apple (NASDAQ:AAPL), are starting to recognize this disposable era, quickly ending support for older devices in order to push consumers to new ones. While a decade or two ago the way to stay ahead of Moore’s Law was to get the latest-and-greatest for your desk, lap or hand, now the game is to accelerate the replacement cycle.” In case you haven’t been paying attention, Amazon is already there.

The Analysts’ Take on Amazon.com, Inc. (AMZN) (Released: 06/07/2016)
Apparently Amazon has been turning more heads than Facebook as of late. Amazon has been pushed to the top of investor’s lists after it finally turned a profit in Q2 2015. Since then the stock is up nearly 70% while steadily making gains on the bottom line. Many experts now believe Amazon will become the first trillion-dollar company and cross the $1,000 per share threshold — a title previously believed to be held by Apple Inc. (NASDAQ: AAPL) or Alphabet Inc (NASDAQ: GOOG,GOOGL). Amazon also continues to make headlines as Jeff Bezos opens up about his long-term goals for the company. Amazon is already working on making Alexa, its acquired web traffic data analytics service, recognize consumer emotions in addition to investing $3 billion to begin operating in India. Analysts on Estimize are looking for earnings per share of $1.18 on $29.72 billion, reflecting a 494% increase on the bottom line and 27% on the top.

Have fun shopping and invest wisely!