It seems everyone is reverting to their childhood selves as we all rejoice over the release of Pokemon GO. We certainly are! For more details on what kind of impact this has on the markets and tech related news this Monday click here:

Nintendo leaps 21% on Pokemon GO but the hurdle to killer profits is high: (Released: 11/07/2016) Nintendo shares rallied 20% over the weekend following Pokemon’s first official foray into the mobile sphere with the rollout of the mobile Augmented Reality game Pokemon Go. Even the Call Levels team was momentarily distracted pending its release but unfortunately it isn’t live here in Singapore yet…Nonetheless, shares were up 20.62 percent on Monday’s open at 19,625 yen (US$194.79) per share; this follows Friday’s gains of some 8.9 percent and according to Bloomberg , the two-day rally for Nintendo has lifted the company’s market value by 718 billion yen, or $7.1 billion. Nintendo is finally moving beyond its console strategy, acquiescing to investor demands last year to enter the mobile market. With Pokemon Go’s potential for monetization already resulting in its stock surge, analysts, investors and gamers are eagerly awaiting Pokemon GO’s global release beyond the US, Australia and New Zealand. Keep a close eye on that Nintendo Stock!

Microsoft Corporation (NASDAQ:MSFT) Check on Company Stock Performance (Released: 10/07/16) Another major multinational tech company is Microsoft (NASDAQ:MSFT). With their planned acquisition of LinkedIn and announcement to sue the feds for privacy and security reasons, it seems Microsoft has been all over the news recently. How has this affected their stock? Well, after the latest trading session Microsoft Corporation shares closed after moving +1.76% stopping at $52.30. To take a longer term view, the stock has traded in the range of $39.72 – 56.85 over the past 52-weeks. So with this information in mind we encourage you to set your Call Levels and gauge the current price level of the stock if you want to invest in Microsoft.

Why This Analyst Worries That AMD Bulls Ran Its Stock Up Way Too High (Released:11/7/2016) Advanced Micro Devices Inc. or AMD (NASDAQ: AMD) is known to many hardware geeks for their cost competitive chips and processors. Although AMD was one of the top performing tech companies in the first quarter of 2016, an analyst from Bernstein warned against large investments for now. Stacy Rasgon downgraded the stock to Underperforming and also set a price target of $3.00, implying a 40% decrease from current levels. In his analysis , Rasgon attributed AMD’s positive performance to Bristol Ridge channel fill, unsustainable demand and also the fact that AMD’s new Zen chips in the server market might not take off for another year. Bernstein is worried AMD could disappoint when its second quarterly earning reports are released, including a consensus expectation of -$0.08 in earnings per share and almost $952 million in revenue.

NVIDIA (NVDA) Hits New Lifetime High: (Released: 08/07/2016) NVIDIA (NASDAQ:NVDA), In contrast to AMD however, NVIDIA, the GPU and visual computing giant, has been trading at an all time high and steadily making gains over the past month. Trade-Ideas LLC identified NVIDIA (NVDA) as a new lifetime high candidate. Covering equity analysts currently have a bullish view on shares of NVIDIA Corporation (NASDAQ:NVDA) on a consensus basis, with analysts optimistic with speculation on NVIDIA’s latest GPU, the affordable GTX 1060, rumored to offer improved performance over last year’s GTX 970 while harboring architecture conducive to Virtual Reality applications. We encourage users to track NVIDIA with several Call levels over the coming weeks. 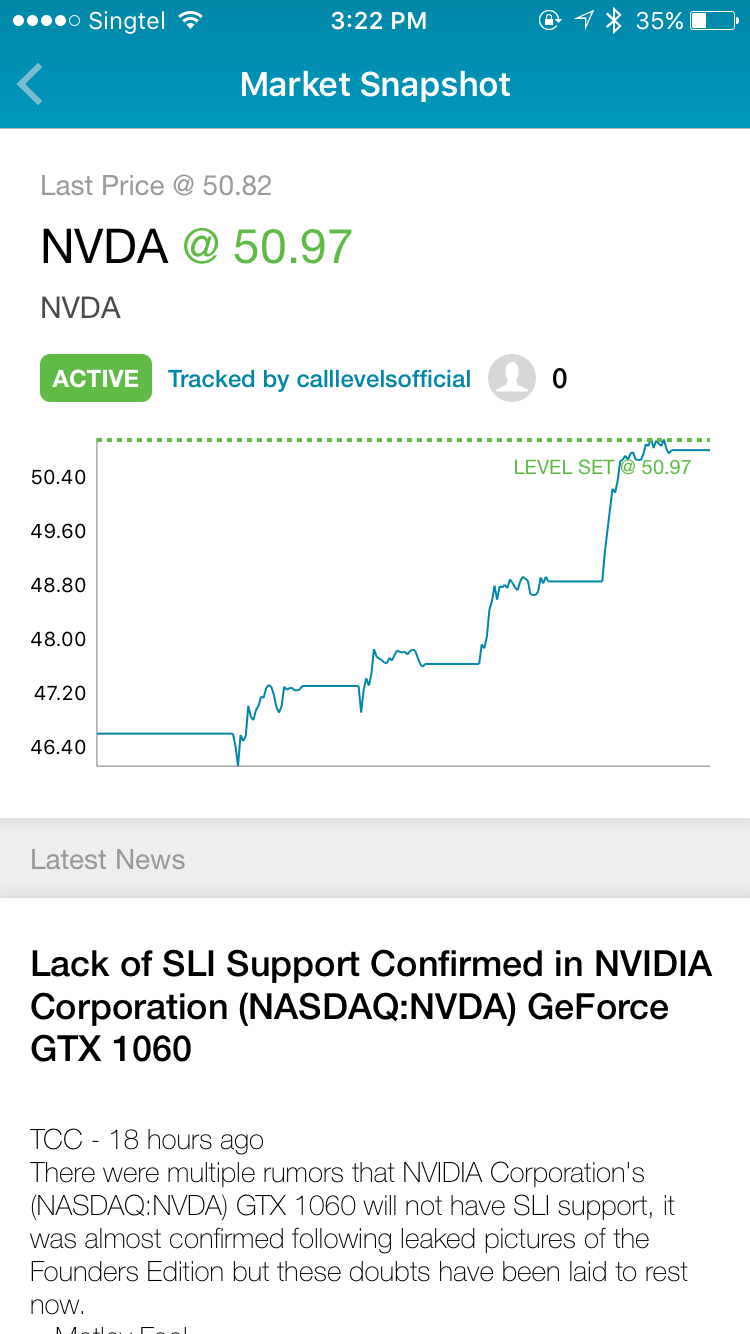