The battle between Trump and Clinton heats up as the race to replace Obama in the White House approaches into its final month. As many would agree, the 2016 campaign has been one of the most bizarre US presidential elections in history.

In a recent survey carried out by Pew Research Center, disliking the opponent is a major factor as to why voters chose to support a candidate. 33% support Trump because “He is not Clinton” while 32% support Clinton because “She is not Trump”. How apt! 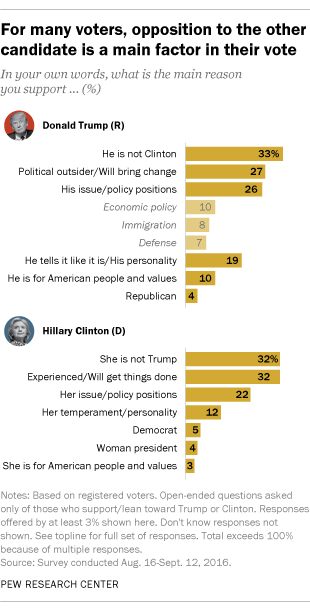 This explains pretty much how the election has been an absurd spectacle where credibility and political stances do not seem to be the cornerstones of electing the nation’s next leader. So far, the decision mainly boils down to who would not swing to the far end of the “worst” spectrum rather than focusing on the “best”.

It does not come as a surprise since “Majorities of Americans describe themselves as “frustrated” and “disgusted” with the campaign, while few declare themselves “interested”, “optimistic” or “excited.” And these negative takes have only become more widespread over the course of the summer.” – People-Press

Who will be the candidate that the rest of the world is voting for then? In a fun project created by Arthur van ‘t Hoog and Filidor Wiese from the Netherlands, anyone from any country can cast a vote. At the time of this article’s publishing, the results which are updated in real-time shows Trump leading the poll at 52%, while Clinton lags behind at 48%.

Whether you are a Trump or Clinton supporter or none, one thing for sure is that the outcome of this presidential election might be the next Black Swan event worth watching out for! Share with us your thoughts and join us for more glimmers of weirdness by participating in our poll below!

P.S. We are giving out 3 extra call levels for all users who participate in the survey. All you have to do is to email us a snapshot of the completed survey together with your username and we will personally increase your call levels!

Update (3 Nov 2016): The survey is now closed! Thanks to all our readers who submitted their responses; check out the results from the poll here!

Create your own user feedback survey